Sensei Debi Steven, Chief Instructor of Funakoshi Shotokan Karate West London takes competition very seriously. When students from her club enter a karate tournament, she is determined that they do well. In order to help them achieve this she has formed a competition squad who undertake additional training to help them focus on their performance at competition level.

Sensei Debi, who has over 400 students in her Dojos across South West London, formed the squad six months ago following a very successful year at competitions in the UK and abroad, to foster and encourage the competitive ethos within the club. The squad is open to all members of the club who have achieved success in competition or who have trained exceptionally hard in class. The members of the squad range in age from 6 to well over 40, and in experience from those who have done karate for less than six months to those who have done it for many years.

Membership of the squad is seen as a real honour within the club, and the children and adults strive to be selected. In addition to the health and fitness benefits achieved by the extra training, membership of the squad has helped build the confidence of many of its quieter members, especially among the younger children. The ethos within the squad is one of hard work, and through this the children learn that in order to win, they must train hard. They also learn that even if they don’t win, they need to learn to lose with good grace, and be good sports.

It’s not all work though, the squad is very close knit, and many new friendships have been formed at the training and the competitions among both the children and their parents. Some parents have even been inspired to start karate having seen beginners of their own age competing!
The squad has been a great success and since its formation, the club has won a number of gold, silver and bronze medals in team and individual events in sparring and kata at competitions in Turin (Italy), Verona(Italy) and Seaford in the UK.

For more information visit www.fskauk.co.uk or www.peeweekarate.co.uk
You can also contact Debi on 020 8940 8958 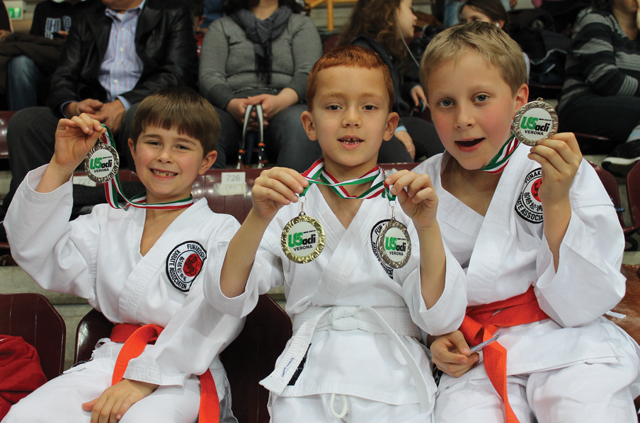