Keeping up with the critters

Keeping up with the critters

The UK's largest virtual playground for children aged 6-12yrs has just hit 18 million registered users. It's topping the league tables ahead of Moshi Monsters and Club Penguin, but did you know its founder is a London mother of one cheeky toddler? 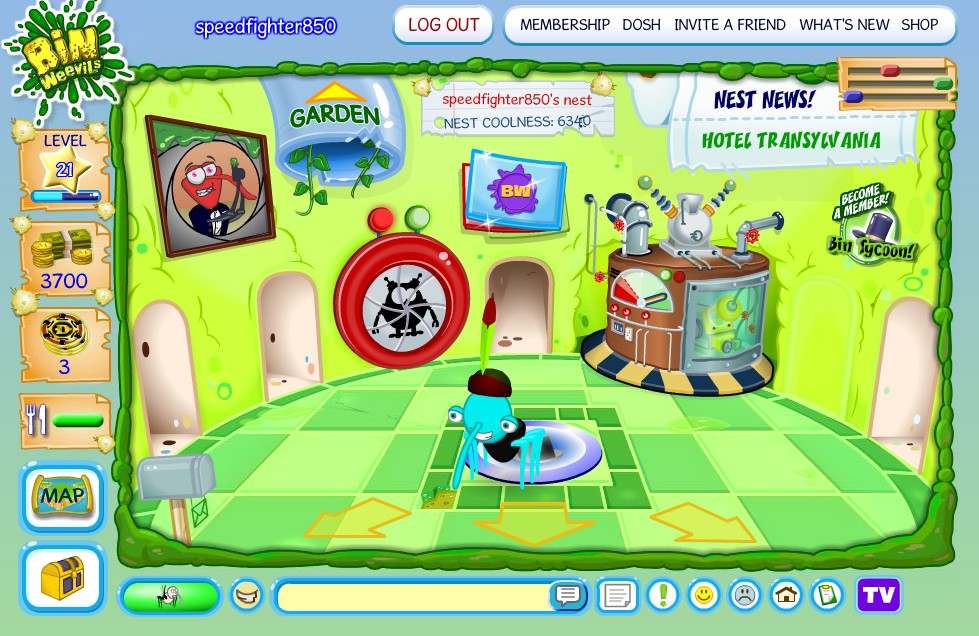 Bin Weevils.com is a phenomenally popular virtual playground for children aged 6-12 years. Each member is allocated their own avatar (a pointy-nosed weevil) and can set up home by buying items for their nest (house) and garden with mulch (the weevil currency). Completing quizzes and crosswords or harvesting fruit from your garden earns more mulch, whereby you add new rooms and cram them full of yet more items. You then invite random weevils to inspect said nest and give it a coolness rating.

Parents will be pleased to hear that the first quiz is a daily “brain strain”; identifying flags, a touch of verbal and non-verbal reasoning, a bit of French and some maths. At Flem Manor there are crossword games; in Dirt Valley it’s weevil go-karting; at Flum’s Fountain or Fig’s Cafe you can order a slime sandwich, hang with your buddies or try a few chat up lines: “yo was up” “wan go my nest”, “doe wanna, cya”. Sadly not cool to spell or punctuate accurately.

But with Bin Weevil membership (conferring Tycoon status), players get access to exclusive areas and products: missions at Gam's Castle, wearing funky hats and owning your own Bin Pet. And luckily, if you don’t feed or train your pet, they wont die, but will be annoyingly disobedient. This autumn, Bin weevils and Bin Pets will be joined by Bin Bots: critters who will sweep, hoover and hopefully do nest chores. Sadly, I suspect children wont be transferring these skills into real-life experiences.

There are currently 18 million registered weevils. That’s an enviable and valuable audience of 6-12 year olds that can be targeted with advertising, surveys and powerful video on demand, not to mention the up-sell of Tycoon Membership at £34.95 per annum (or 4.95 per month).

One of the visionaries behind Bin Weevils, Amelia Johnson, has her own Bin Tycoon in waiting, a feisty toddler, Natasha, who has yet to be signed up to this virtual world. Born in South Africa, Amelia moved back to the UK at six, and went to the independent school Claremont Fan Court in Esher. Her model looks took her straight into acting and musical theatre, but a job working for The Children’s Channel presenter, Carol Chellman, was the start of a stellar career in children’s programming. By her early 30s, Amelia was head of Creative at the Disney Channel before setting her own independent TV production company, Prism Entertainment, producing popular shows for the BBC, Disney and Nickelodeon such as Beat the Sidewalks, The Stables, Life Bites and Text Mates.

However, for the last five years, growth in children’s entertainment has been around websites, which provide other ways for children to connect with their favourite TV show. “We’ve built websites and games for some of the most popular children’s programming, including: FiFi and the Flowertots, Rory the Racing Car and Peppa Pig,” explains Amelia. Originally Bin Weevils was launched as a stand alone game within Nickelodeon’s website, but she decided to develop the concept further just as a social networking sites for children took off.

But the competition is tough. Primary school children are fickle and completely disloyal. Many will have membership of Bin Weevils, Moshi Monsters and Club Penguin - gravitating between all three depending on the “in-playground-thing”. There’s a dark side to these sites too. You only have to google “bin cheats” to gather all the clues to the crosswords and quizzes, and nest envy can result in poor coolness ratings. If you’re rude or swear you get your chat disabled, and there’s a creepy element observing conversations at Flum’s Fountain of a school morning, wondering why all these children aren’t at school? Or whether they are actually children.

Many parents battle against screen-time taking over more traditional play activities, and I am guilty of dropping Tycoon membership when I feel the balance is out of kilter. There’s no escaping the brand’s reach now that eight Bin Weevil books have been published with 10 due out next year. Bin Weevil paraphernalia is soon to be on the conveyer-belt from China, as well as a monthly Bin Weevil’s magazine and Top Trumps trading cards. “We are very keen to keep the merchandising to a high standard,” Amelia says, as I look glazed - imagining toy shops being plagued by creepy-crawlies.

Have we reached another tipping point in the fast evolving world of children’s entertainment, where there’s no escape from a branded experience? “It’s not about the device any more, it’s the quality of content that will drive development – and children are both honest and discerning. If they don’t like something, they’ll let us know within the hour,” explains Amelia. “It’s actually quite hard for the team to keep up with the list of requests.”

I perk up. “Now, about those requests…can you possibly create a button that pops up to say “that’s enough for today?”