Club Petit Pierrot is celebrating it's 20th Anniversary with the launch of a new educational CD of French songs and rhymes.

Club Petit Pierrot was established in 1993. They offer fun French lessons to children aged from 8 months old across London and have been highly recommended by BBC, Daily Telegraph, Daily Express and Time Out. To celebrating their 20th birthday they have launched a new educational CD, "Learn French: Original songs & rhymes for children". This CD is the result of 20 years of research and development especially adapting the immersion method in teaching French to young children and is a collaboration between Stella Bataille (Founder/Director of Club Petit Pierrot) and the talented composer/musician Alex Grigelis (keyboard player in Disney's West End hit musical "The Lion King").

The hour long CD contains 30 original French songs and rhymes, as well as 6 traditional songs which have been completely re-worked for a modern, young audience. It's 32 page colour booklet contains all the French lyrics with a full English translation, as well as tips from Pierrot on how to play with your child and practise at home.

The launch of this CD is all the more important as recent research on toddlers at King's College London have proved there is a "critical window" for learning a second language before 4 years of age, and that the brain is actually remodelled by foreign language learning. So "the earlier the better" for learning a second or third language is certainly true, and listening to a CD is an easy way to expose babies to a foreign language and to its sounds. Ongoing scientific research around the world continues to endorse that learning a second language early in life enhances cognitive development in children and leads to significantly better academic results. Babies are certainly linguistic geniuses, and bilingualism boosts your brain power! 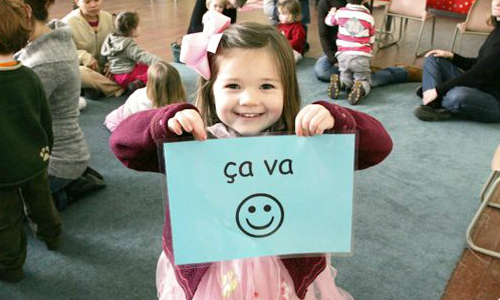