Bob, the Man on the Moon picture book has inspired this series of great stories about Bob and his sidekick, Barry and many children will recognise the characters from the earlier picture books.

Bob lives on Earth but visits the moon every day with his dog Barry to show visitors around.

In this story, Bob has created a Galaxobot robot that wins an invention competition for astronauts but his fellow-contender for the prize is furious that he lost. He takes his revenge on Bob's robot and alters its instructions. Instead of being kind, the new Galaxobot robots intend to take over the whole universe - and only Bob can stop them.

These stories have bags of humour and great story-lines, supported by Simon Bartram's black and white illustrations. Each book is about 80 pages long and ideal as early independent readers for children aged 6+. Boys, especially, will love these stories. 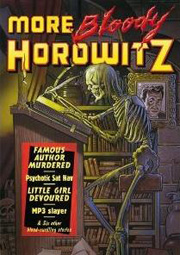 
Just in time for Halloween comes this collection of macabre stories from Anthony Horowitz, author of the Alex Rider books.

Some of these are quite shocking and gruesome, but often it is the twist in the tale that takes them into another dimension and makes them really clever.

There are stories of ultimate revenge, from freshly sold human meat and uncontrollable robots, to life-sucking MP3 players and reality TV where death is the penalty.

Children who enjoy reading horror stories, and Horowitz fans, will love this book - and it's good to see such a strong short story collection being made available that will have undoubted appeal to boy readers.It’s a perfect read for a spooky Halloween night.

© 2021 The Parents' Directories. All Rights Reserved.