To tie in with the Queen's Jubilee this month, our first book Elizabeth the Jubilee Fairy follows the story of 2 human girls who help the Jubilee fairy rescue the celebrations from being thrown into disarray by Jack frost. Ghost buddy: Zero to Hero is written by Henry Winkler, who is better knows as The Fonz. In it Billy Brocilli has a 'ghost buddy' and although he doesn't want or think he needs a ghost following him, one does come in handy at times. 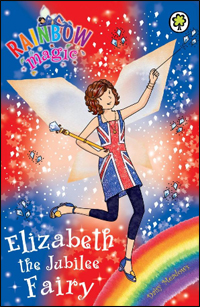 The Rainbow Magic series has introduced this special story as part of this month’s celebrations for the Queen’s Jubilee!

Elizabeth the Jubilee Fairy is in charge of making every jubilee perfect! But when Jack Frost steals Elizabeth's Diamond Sceptre, both fairy and human celebrations are headed for catastrophe.

It will take two special human girls, Kirsty and Rachel, all their luck and courage to track down the sceptre and get the Jubilee celebrations back on track.

The Rainbow Magic series has plenty of appeal with their adventure, magic worlds and challenges – but the Jubilee Fairy will also bring a touch of magic to celebrations this month!

You might know Henry Winkler best as ‘the Fonz’ but he is also now an established children’s author – not bad given that he has always struggled with writing because he is dyslexic.

This story about Billy Broccoli and his ‘ghost buddy’ is packed with action and boys, as well as girls, and reluctant readers, will enjoy it.

Billy Broccoli has never wanted his own personal ghost, but that is just what he gets when he accidentally ends up sharing a room with Porterhouse the Third (or the Hoove), a funny teenage ghost with attitude – and some big plans for Billy.

With the school bully on his tail, Billy needs all the help he can get!