This April ReadingZone has selected Tales of Trouble: Undercover Aliens by Ceci Jenkinson and The Secret Kingdom by Jenni Nimmo. 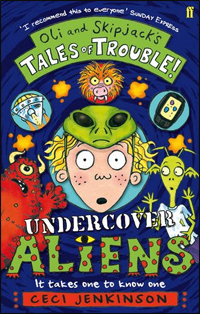 This story has aliens in spades including three-legged alien pets, a UFO and a really evil guy called Zolborg Naphax from the planet Quorkidellian.

Have you ever wondered if there are aliens living next door to you? Oli thinks the new family across the road, the Kuznets, are aliens and it’s about to land him and his mate Skipjack in a whole lot of trouble!

For the Kuznets aren’t from Kalamistan at all, they really are aliens, and they need help to get home – and to escape the clutches of that evil guy from the planet Quorkidellian.

Can Oli save the Kuznets, and Earth, from the clutches of Zolborg Naphax? 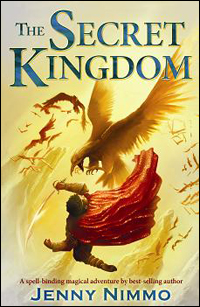 An adventurous fantasy story from the bestselling author Jenny Nimmo, featuring a magical ring, a moon spider’s web and a secret forest kingdom.

Two children are forced to flee their home and their secret kingdom when the evil viridees seek them out. The children hold the moon spider’s web which gives its owner magical powers, and the shape-shifting viridees will do anything to lay their hands on it.

This is a magical and imaginative story that will keep children entranced. It is a prequel to the Charlie Bone series of books but children don’t have to have read the other books to enjoy this.