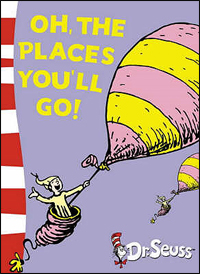 This Seussian classic tale is republished this month with an audio CD, read by Miranda Richardson.

‘Oh the Places You’ll Go’ primes the reader that what lies ahead for each and every one of us is a journey.

While parts of that journey will be fun - ‘Oh the places you’ll go! There is fun to be done! There are points to be scored. There are games to be won’ - the way ahead may not always be clear: ‘You will come to a place where the streets are not marked. Some windows are lighted. But mostly they’re darked.’

Although it has been many years since Seuss’s stories were first published, their humour and vision still makes them some of the most enticing early reading books around.

Seuss’s trademark whimsical and outlandish illustrations are an extra draw for any of his books and this one is no exception – look out for the moving mountain on the last page.

Why You Need a Passport When You’re Going to Puke 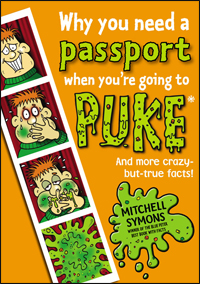 If you like your facts short, sharp and a bit silly, then this is the book for you.

It has loads of amazing facts, some of them surprising, some of them odd, and some that you might never actually need to know in your entire life – for example, there are ten times more horses in Mongolia than there are people.

All the facts have a geographical base but even if you don’t like Geography, don’t let that put you off – this isn’t anything like normal a Geography lesson. You’ll find out, for example: that hundreds of years ago in Japan, anyone found trying to leave the country was executed; that after the Normans invaded England in 1066, our official language was French for 300 years; and that Americans use enough toilet paper daily to wrap around Earth nine times!

And you’ll need to read it to find out why you need a passport to puke….