Both of our picks this month would be perfect for little boys... The new early years version of Horrid Henry's Rainy Days was confessed as a favourite by author Francesca Simon. The World of Norm, written by comedian Jonathan Meres and follows Norm's boring and sometimes embarrassing daily life. 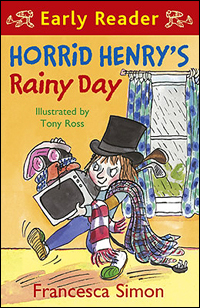 Although he’d probably loath the idea, the irrepressible Horrid Henry hass become available for early readers in these well-packaged books from Orion. A number of Horrid Henry stories are being given a brush-down and some smart new colour illustrations to support children as they develop their confidence in reading.

Author Francesca Simon has said that Horrid Henry’s Rainy Day, where Henry decides to write a will, is one of her “very favourite” stories. The idea was sparked when a friend asked her what stories she would write if Horrid Henry ever grew up?

In this story Horrid Henry, bored and fed up on a rainy day, decides to write his will. The only trouble is, he decides it is a lot more fun getting stuff from Mum and Dad than giving away his own treasures . . .

As in all the best Horrid Henry stories, there are plenty of horrible thoughts, bad decisions and unpopular actions within its pages, but that’s just what makes these stories so good!

The World of Norm: May Cause Irritation 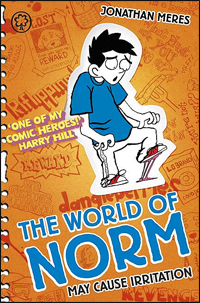 Hot on the heels of the hugely popular Wimpy Kid books comes The World of Norm, about a very real boy and his family and the dramas of everyday life.

Norm is a bit like a grown-up Horrid Henry with too-good younger siblings and a rather dull family life. In this story, Norm’s week begins with a visit from his perfect cousins (horror!).

The week doesn’t get much better with annoying younger brothers, a mobile phone from the Dark Ages, a dog called John and more time spent with his perfect cousins than he’d like adding to Norm’s gloom. But when he dreams up a plan to get a new mobile phone involving an attempted dog-napping, blackmail and a very bad disguise, things are bound to get a whole lot worse….

The series is written by former comedian Jonathan Meres and Norm’s perspective on his life, and the cartoons illustrating his antics, will guarantee plenty of laughs.