Our pick of new books this month include the funny tale of 12 year old barney, who wished to be a cat in order to have a life of ease... not believing his wish would actually come true!

Sir Scallywag and the Golden Underpants

By Giles Andreae and Korky Paul 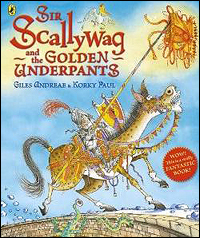 The creator of Purple Ronnie and the illustrator of Winnie the Witch have been brought together to create this fabulously funny story about a king, a knight, a naughty giant and a rather nice pair of golden undergarments!

King Colin was a mighty king of England, who wasn’t clever or bold –

“What made King Colin special

Were his Underpants of gold.”

When a giant steals away with these powerful pants, a brave and bold knight called Sir Scallywag is sent to retrieve them – and even though Sir Scallywag is only six years old, he manages to get the better of the giant.

This is a wonderfully energetic romp and children will love the story about a king and his bare bottom (and the brilliant rhymes) but what really makes this book a treat are the illustrations which are full of fantastic details and humour. Look out for the king’s hairy butt, the washing strung out across the battlements of the castle, the horses’ expressions and the numerous spiders and other creepy crawlies...

To be a Cat

If your child has ever wondered if cats have a secret, mysterious life that is better than being human and having go to school, then this is the book for them.

12 year old Barney Willow is having a terrible time – his dad has disappeared, he’s being bullied at school and worst of all, the headmistress (who would put Roald Dahl’s headmistress in Matilda to shame) is on his case.

In a foolish moment, he wishes with all his heart that he had the life of a cat that he sees lying in the sun – one of luxury and ease. When he wakes up the next morning, he realises that his wish has come true. He is now a cat! (and the family spaniel is after him!)

This story follows Barney’s race against time as he tries to become a human once again and, within the humour and the adventures, there is an engaging message – to be proud of who you are.