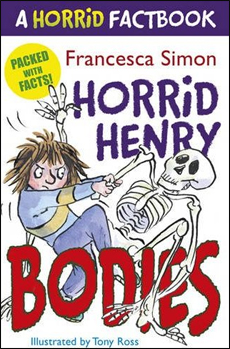 Did you know that whenever you talk or chew, little lumps of earwax fall out of your ears (luckily they’re just too small to see!)? Or that your nose makes about a litre of slimy mucus every day and that you swallow most of it?!!!

With Horrid Henry’s help, children will send their playmates shrieking around the playground as they share these brilliant (and yeuch) facts about our bodies.

Not everything in the book is completely gross – there are also some interesting things to learn about our muscles and intestines, and you’ll find out how long you’re going to spend on the toilet during your lifetime….

There are also sections about animals, creepy crawlies and the ocean (sharks can smell blood from five kilometres away… watch out next time you go swimming!)

It’s great to see such a popular character for young readers now stepping into the non-fiction arena. 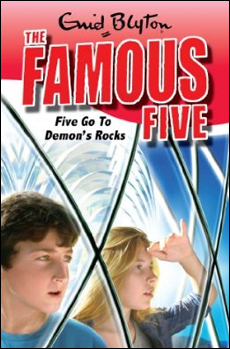 The Famous Five’s adventures have been updated for a modern audience – so no more ‘school tunics’ or ‘jolly’ times, and ‘mother and father’ are now ‘mum and dad’.

It means you can introduce children to these brilliant stories without worrying that they are going to be put off by the old-fashioned language. All the Famous Five books are being revamped, so if they enjoy this one there are plenty of others to try.

In this adventure, the Famous Five children explore the caves at Demons Rocks after hearing stories that treasure is buried there. When they find a golden coin, they realise that the stories might be true – but they also realise that danger lies ahead.