This month's The Magnificent Moon Hare follows the story of a rather spoiled young princess, who is used to getting her own way, but gets a little more then she expects with her latest demand. Meanwhile the characters of Clovenstone Keep (giants, goblins, princesses and wizards) don't quite live up to their name sakes in Goblin. Least of all Skarper the unusually clever goblin. Will he be able to save Clovenstone Keep? 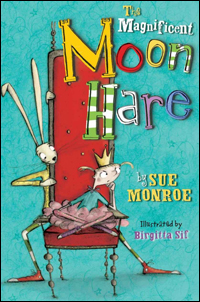 PJ Petulant is a spoiled and rather bored princess who wants 'fun and games and jokes and tricks and lots of fantastic stuff'! She also wants to get her own way, most of the time, and when she demands the Moon Hare (who lives in the moon) she expects to get him, too.

When Moon Hare does appear one night in her room, PJ Petulant soon realises that she has got rather more than she bargained for as Moon Hare is just as adept at getting his own way as she is. Throw in a dragon called Sandra (who is actually a boy dragon) into the mix, and sure enough, chaos follows.

This is a lively, irreverent story full of humour, inventiveness and petulant adults. It’s great fun.

The author of the series, Sue Monroe, has worked as a television and radio presenter but is best known as the programme links presenter on BBC’s CBeebies. 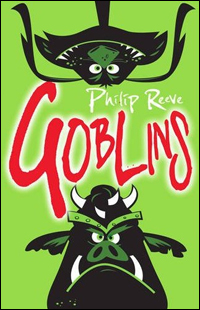 Enter a world of goblins, giants, wizards, princesses and heroes. But don’t expect the princesses to need rescuing, the wizards to be very good at magic or the hero to be terribly good at being heroic.

Clovenstone Keep oozes magic, but its inhabitants are pretty clueless what it’s all for or how to harness its spectacular power. Throw Skarper the goblin into the mix, and things are bound to get even more muddled.

Skarper, unlike most goblins, is clever and cunning, and he realises the magic of Clovenstone is on the rise – but will he convince his fellow goblins of the danger ahead?

Award-winning author Philip Reeve has created a funny, lively and unexpected story that will be enjoyed by girl and boy readers alike.