To tie in with the Queen's Jubilee celebrations , we have a book written by I Love My Mummy author Giles Andreae with illustrations bought to life by children's favourite Tony Ross. in Me the Queen and Christopher Freya is lucky enough to be picked to spend the day with the Queen! The Sleeping Army written by Horrid Henry author Francesca Simon, follows a little girl who accidentally wakes a statue in the British Museum, and the adventure that unveils.

Me, the Queen and Christopher 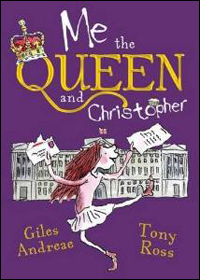 The Queen’s Jubilee is just around the corner and this story tells us what life might really be like behind the doors of Buckingham Palace!

Freya is the luckiest girl alive – she’s been picked to spend a day with the Queen! But she soon finds out that life as a queen is not all tiaras and lobster. In fact the queen eats baked beans, likes dancing around in her tracksuit, and LOVES cupcakes! (and her favourite pair of knickers have dogs on them!)

The Queen and Freya make loads of cakes for Freya to take home to her disabled younger brother, Christopher. But it’s Christopher’s turn to have a treat when the queen spots them both during her royal parade two weeks later – and Christopher gets to ride in her carriage.

Look out for posh butlers, lots of corgies and soldiers with furry hats. 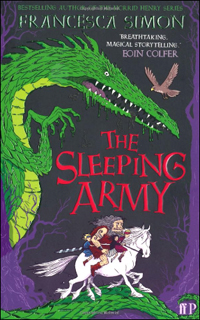 Francesca Simon, author of the bestselling Horrid Henry books, has started to write for an older readership and her first story, The Sleeping Army is a funny, fast-paced adventure story based on the old Norse myths.

In it, Simon imagines a world where people still worship the old Norse and Anglo Saxon gods. So Wednesday is now Wodnesday, Hel is Hell and instead of being in the second millennia, it is now 5,012AW.

The action begins in the British Museum, where Freya’s father works as a security guard. One night, he leaves her alone in a section devoted to Woden in the Medieval ages and she accidentally wakes the statues in the museum. Next thing she knows, she is being whisked away to Asgard, the land of the Viking gods, and is given a mission – and failure is not an option.

Funny, inventive story with a great array of characters and lots of action.