Children will love the slightly spooky adventure that unfurls in Monster Mountains written by acclaimed author Marcus Sedgwick, and discover whether Raven Boy and Elf Girl manage to save their home from the Goblin King.

Older children can follow the adventures of Lemony Snicket in this latest edition to his adventures in Who Could That Be at This Hour. Will he be successful in solving the mystery of the disappearing statue? 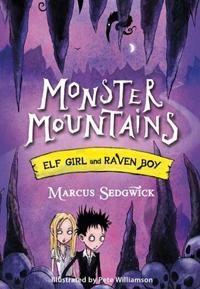 The heroic (but small) Raven Boy and Elf Girl are on their way to face the Goblin King, who is threatening to destroy their home. They have been chased by a giant, nearly eaten by trolls and biffed by a goat, but now they face their biggest challenge yet. Simon, a wizard, wants to turn them into stone.

Will they manage to outwit Simon? Will they escape the trolls, who still want to eat them? Will they ever stop squabbling long enough to try...?

This story has loads of monsters, a giant rat, lots of magic and some great climbing tricks! Look out for the earlier title, Fright Forest.

Who Could That Be at This Hour? 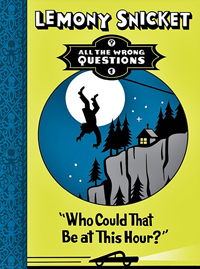 Lemony Snicket, who is the narrator of the bestselling A Series of Unfortunate Events, is back with a new series of books. This time, he is giving us an account of his early career as a detective.

Aged just 13, Snicket finds himself in a faded seaside town called Stain’d By the Sea (which isn’t actually by the sea...) and trying to solve the mysterious theft of a statue, the Bominating Beast.

But first he has to work out if the statue has actually been stolen, why anyone would want to steal it (it is, after all, small, brown and ugly), and who is the mysterious Hangfire, who seems very keen to lay his hands on it?

It’s a lot of questions – but are they the right questions, or the wrong questions? And, asks Lemony, is it any business of yours?

Expect to be perplexed, entertained, and full of questions – but don’t expect any answers!